A sequel to my son Takeshi's photo series of Koriyama when he visited Japan in June. This time it's a photo series from the Tokyo area:
Tokyo seemed much the same. At first glance, you don't notice much difference since the triple disaster of 3/11.  But when you look a bit closer, signs of the impact of electricity shortages are everywhere. These are photos I took on my visit to Japan in early June.
Narita Airport
Narita Airport felt a bit empty. Perhaps it was just the time of the day? The SAS flight from Copenhagen was only about a third full. So empty that we could stretch out and occupy entire rows of seats to sleep. Amongst the passengers, I noticed quite a few mixed marriage families. Perhaps returning home to Japan or visiting relatives? There were a few Japanese businessmen but the large Japanese tour groups were noticeably absent. Perhaps it was because it was a Thursday flight or perhaps they'd cancelled out of  self-restraint?
One of the elevators at Narita Airport was taken "out of service to save electricity effect investigating". They meant "out of service to investigate the effectiveness for saving electricity." 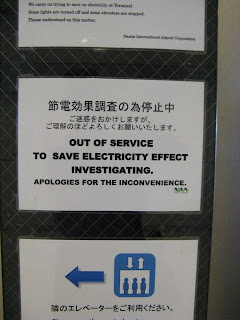 The Japan Rail (JR) Narita Express that links Narita Airport to Tokyo Station was running on a reduced timetable to save electricity. The sign also warns that in the event of a planned electricity cut, the Narita Express may not run. 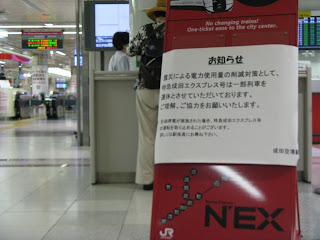 "Saving Electricity". This poster is everywhere in the stations across the Tokyo area. 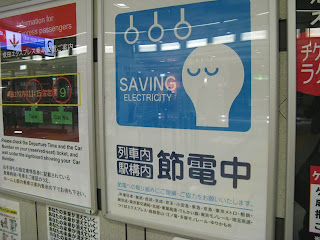 View from the Narita Express en route to Tokyo Station. Farmers are out tending their newly planted rice fields just like any other year. Even in the Narita area, there were houses topped with blue tarpaulins to cover up the damaged roof tiles. It's a testament to the strength of the earthquake. 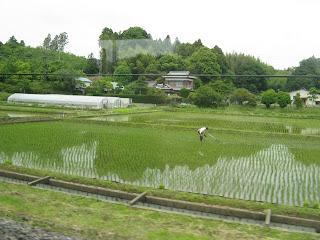 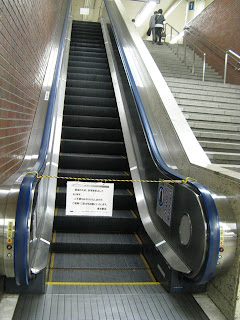 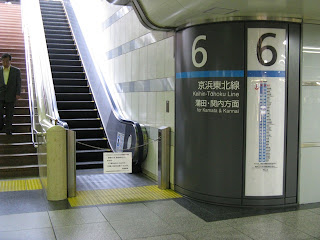 A peculiar feature of Japanese roadworks, however minor, is that you generally have a security guard waving you on or stopping you from crossing - just in case you stumble into the hole in the road. This guy's job in Tokyo Station was to wave his white gloved hands to approaching passengers to prevent them from going down the escalators behind him. He's also equipped with a megaphone to apologise for the inconvenience through his megaphone. It may be a job creation scheme, but it could have advantages. For example, it would make it expensive for construction companies to have idle road work sites as you see so often in the UK. Perhaps road works will get finished quicker? 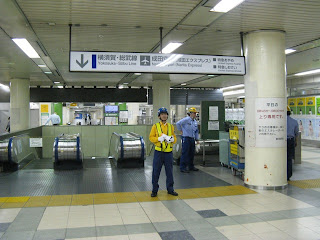 As well as stopping escalators, the lighting is reduced. Here, in the busy underground restaurant area under Tokyo Station, a sign announces "reduced lighting to save electricity". I didn't notice that it was any darker. Perhaps it's normally just unnecessarily brightly lit. 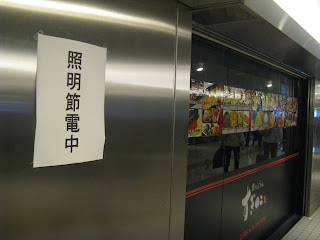 A gift store in Tokyo Station running a campaign "fair" in support of Tohoku (Northern Japan) as part of "Gambarou Nihon!" (let's get through this Japan!). Gambare/Gambarou is a slogan you see everywhere since the triple disaster of 3/11. It's one of those hard to translate Japanese catch phrases. Anyway, behind the guy walking past the store is a stand selling "Hagi no Tsuki", a speciality cake from Sendai, north of Fukushima. Sendai was hit by the massive tsunami after the earthquake and the people of Tokyo can feel that they've helped Tohoku with a bit of retail therapy. 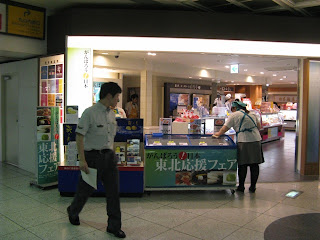 Chiba
Across Tokyo Bay in Chiba Prefecture, lights on the highway were turned off to save electricity. 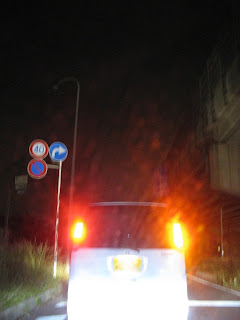 Parts of Chiba were very badly affected, particularly Urayasu, the reclaimed land adjoining Tokyo. It's probably best known for Tokyo Disney Land. A massive 3/4 of Urayasu was affected by soil liquefaction (as reported by Nikkei 14 June 2011). During the earthquake, the unstable soil of the landfill became like liquid. This YouTube movie shows a building still on its foundation rocking like a boat as the soil turned into quicksand during the earthquake. You can see the extent of the damage in these pictures taken around Tokyo Disney Land. Disney fans will be glad to hear that Tokyo Disney Land didn't suffer from soil liquefaction because they had extra-compressed the soil before building. Wise move.
Life goes on in Tokyo
In Fukushima, conversations quickly turn to the nuclear disaster. In Tokyo, conversations quickly turn away from the nuclear disaster.

Having spent a few days in Fukushima prefecture and talked to many people there, the nuclear disaster seemed to be all I could think of. But in Tokyo, things had moved on. Of course, everyone has their own stories of when the quake hit in Tokyo. It's something that everyone will remember: where they were when it hit, just like news of JFK's assassination. But life just goes on in Tokyo. 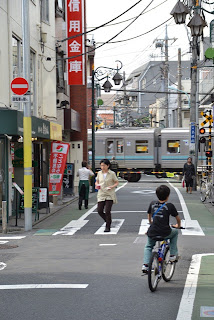 For kids in Tokyo, life is also back to normal. They don't have to wear masks nor long sleeves unlike their counterparts in Koriyama that I pictured in my last photo series. It's hard not to feel that there's some injustice in the situation. For years, the Fukushima Daiichi nuclear power plants had been exporting energy directly to Tokyo and now, power cuts aside, Fukushima is suffering the consequences of the accident... 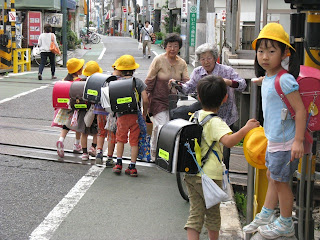