Adventure on Sunday. A young Japanese man, a comic artist living in Edinburgh, contacted me wanting to see round Fukushima for material for a book. He particularly wanted to check out the frogs of Kawauchi. Now, Kawauchi is a  remote hilly area just outside the 20 km exclusion zone. Official population: 2,826 - though most of the inhabitants are evacuated elsewhere. The eastern edge remains in the exclusion zone but most of Kawauchi was in the 20 to 30 km zone where on 15 March last year people were ordered to stay indoors. On 22 April it was re-designated a 'voluntary evacuation area'. In effect everyone left. Then on 30 September last year this was revoked. The village mayor, a Mr Endo, immediately pledged to get schools and a clinic opened by the spring and moved back with his staff in March this year.

But first my new friend wanted to see the barrier into the No-entry zone, so pre-armed with a dosimeter borrowed from a friend, we set off along Route 288 to see how far we could get. Through the towns of Miharu and Tokiwa, and past Insect Land (ムシムシランド). Gradually the landscape began to look run down. Some houses seemed to be inhabited, others not, then we noticed that the ricefields were not cultivated, and overgrown. The village of Miyakoji, at the bottom of the hill leading up to the barrier, seemed prosperous enough. There were schools, even a nursery with swings and slides in the yard, and newish buildings we'd been told housed workers for Fukushima Daiichi. Half way up the hill and a couple of miles out of Miyakoji, we were stopped and asked (very politely) to turn around. A few signs, a policeman waving his arms signalling us to stop. No barrier. (Cars coming the other way, out of the exclusion zone, have to have their tyres washed.) The checkpoint was manned by three men. A quiet country road, birds singing, frogs croaking, no barrier, just a very polite policeman who asked us to turn around.

A few hundred yards down the road we stopped the car and measured the radiation. 0.6 μSv/hr, not much more than in my local park in Koriyama which is 0.414. The reality is nothing like the drama you see on the news.

Back in Kawauchi village itself we met a lady and her young daughter leaving their house. They'd visited to check it out but live in emergency housing in Koriyama. The woman said each house and 20 meters around was to be decontaminated. But her house is surrounded by trees so the radioactive materials would just blow back again.  She's not planning to return to live just yet.

It was Sunday so all was quiet at the town hall and there was hardly anyone around. We drove on. What was most upsetting was the untidiness of it all. At this time of year, the ricefields are flooded and planted with rice seedlings in a six inch grid and dead straight rows. The paths around the paddies are mowed to keep the weeds down and everything is incredibly neat and tidy. To see fields not flooded and overgrown was heartbreaking. And the silence. Nightingales echoing in song, frogs croaking. The fresh green leaves, wild wysteria, wild azaleas. Incredibly beautiful. But just not right.

There isn't much to Kawauchi-mura. Two hundred square kilometres, 80% of which is thick forest. It really is remote. Its main claim to fame is the moriaogaeru, a rare tree frog, and the modern poet Kusano Shinpei who made them famous. We set off to track them down. We travelled many miles along a single track road, alongside a beautiful gurgling river, up and up, racing against the fading light (it gets dark here about 6 pm). We reached the pond. Exquisitiely beautiful. We saw lots and lots of tadpoles but not sure what kind they were.

I've never been to this area before and was stunned by the beauty of the place. But the more I felt the beauty, the more angry I became that this had been spoiled.
Anne 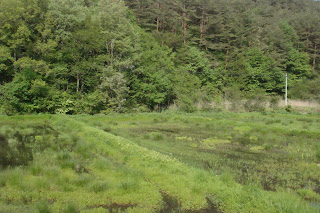 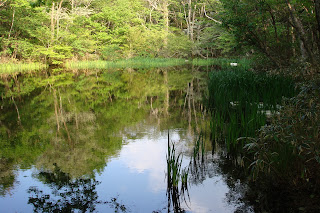 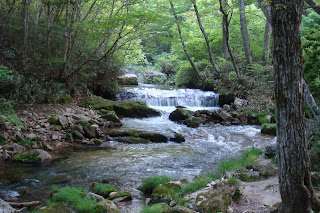