The Power of Print

In this digital age, a couple of things have made me think recently about the power of the printed word. First, some exhibitions by friends Kate Thomson and husband Katagiri, sculptors in Iwate and Edinburgh. After the earthquake and tsunami, power  supplies, mobile phones, land lines and the internet were down but the postal service got going within a few days and in many cases the first news that loved ones were safe was by postcard. To quote the foreword to the catalogue, 'Inspired by the tangible communication of posted messages and the fact that thoughts contained in a single picture can speak louder than words, we started the  "Postcards to Japan" project'. 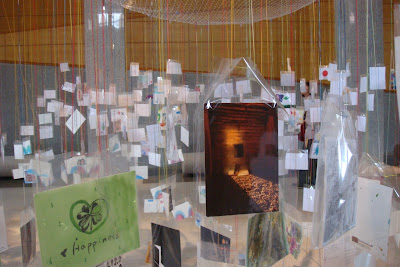 Artists, schoolchildren and other groups sent in postcard-sized artwork and there is music from a Scottish police choir (very good) to accompany it. I saw it in Fukushima Museum of Art in June (photo above) and it's on now in Minami Soma, Fukushima until 23 September.

The couple have followed this with another exhibition "Postcards from Japan" by artists working in the Tohoku region and are working tirelessly as artists to 'heal the broken heart'.
http://www.ukishima.net/

Incidentally, you know that photo of a ship marooned on top of a building in Ishinomaki Otsuji? Katagiri tried to have it preserved as a memorial but to no avail. I can understand that in the early days, when feelings are raw, you don't want to be reminded and there will have been safety considerations. But I saw on TV only the other day that in Minami Sanrikucho people are using the rusty shell of the defence centre where many people died as a sort of  shrine. A far less eloquent memorial. Pity.

Secondly, hurrah for the Fukushima Minpo, our local paper which has received a series of awards from the Japan Newspaper Association for its 'excellent' reporting this past year. As some of you will know, I've been a fan of this paper for a while. To quote the reasons for the award: 'The paper ran a series of features on the many issues the people of Fukushima were facing, giving them the information they needed. It researched the historical connections between Fukushima and national atomic energy policy. Its reporting not just at the site of the accident but over a wide area is a precious record by international standards.'

In a survey carried out by the paper itself last autumn, 61% of people said they read a newspaper more than before the disaster. In the first few months this paper was our lifeline. The national news on TV only gave us 5 minutes and even that paled after a few months. Local TV wasn't much better, only 10 minutes or so. Yes, there's the internet but why do I, who everyday browses the Financial Times, BBC Online and the Nikkei for my general news, hungrily devour the paper when it comes to news about Fukushima? I've come to the conclusion that internet news is for browsing, it's sort of detached, news by outsiders. The national press treat Fukushima as a single entity but, especially after this accident, what with the tsunami and the effects of the radiation, each small area has its own particular problems and the local paper was able to address these. Secondly, the detail. When levels were high, in the region of  2μSv/hour in Koriyama, mothers scoured the paper to find out what the levels were in their area, and what direction the wind was blowing. Later the information became available on the internet but the paper was there first. (Every day there's still a whole page on radiation data, airborne levels, food testing results etc.) The printed word on smelly newspaper has an immediacy, an urgency you don't get on a computer screen. Then, the issues we were having to get to grips with, the situation at the nuclear plant, radiation and health issues, food safety, national energy policy, renewable energy, these were such difficult questions, you need to concentrate and I don't know why, but it seems easier somehow to digest in print.

But it's not just the medium, it's the reporting. The paper has run and still runs features tackling these big issues and presenting them in an easy to understand format. And there are upbeat features - everyday a page entitled 'Fukushima won't be beaten' (福島は負けない Fukushima wa makenai) featuring ordinary people doing positive things. But the main reason for the paper's success is that it is on our side. It speaks for the people here. Several times I've punched the air after reading one of the paper's editorials! Here is the paper's website and you'll find there a valuable archive but again, the website's got none of the detail or immediacy of the paper. Strange.
http://www.minpo.jp/

Into September but weather still hot. Maximum temperatures around 30 'C. The 'lingering heat' they call it (残暑 zansho). Hot but bearable, better than the 'ferocious heat' (猛暑 mosho) we've had up to now. Even verging on the pleasant in the mornings. Roll on autumn.
Love to all
Anne