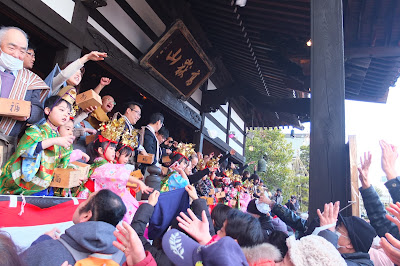 'In with good fortune!', shout the bean throwers to the beat of the big drum. 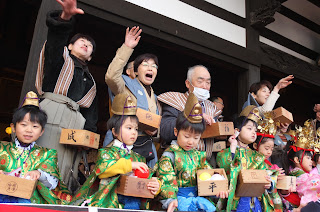 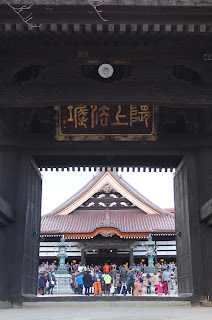 Nyoho temple （如宝寺）in Koriyama, Shingon sect, tombstones going back to the 13th century (Kamakura period). This was the scene of the annual bean throwing ceremony to mark the end of winter, get rid of the demons (outer and inner),
and bring in good fortune. 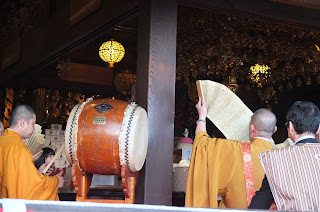 Colourful ceremony beforehand. At one point the 20 or so priests swished their sutras open in a fan-like motion accompanied by shouts to show they were saying all of the scriptures on our behalf, a sort of fast-forward digest of the scriptures. 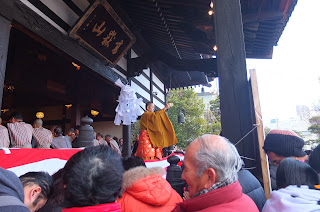 The priest gives his 'blessing' - for safety and good fortune in this new year. Amen.


When the kids were small we used to throw beans at home. A handful up in the air in every room - "In with good fortune!" ( 福は内 fuku wa uchi ) and a handful out of every window, "Out with the demons!" (鬼は外 oni wa soto) The kids must have thought us normally tidy adults had taken leave of our senses.The beans are roasted soybeans and afterwards you eat one for each year of your life. I used to find the beans for months afterwards.

Funny take on this idea in a news programme yesterday morning (Wake Up, Yomiuri TV). The PM was likened to The Peach Boy, Momotaro, who is out to get rid of the two demons, deflation and the strong yen. In the fairy story Momotaro is helped by a dog, a monkey and a pheasant. Abe's weapons are public works (especially disaster defences and repairing ageing infrastructure), quantative easing, and investment in growth (funding application of Nobel prizewinner Yamanaka's iPS cell research has been mentioned but not an energy strategy). The national debt will increase significantly. The nation waits to see how it will all work out  ....
Anne