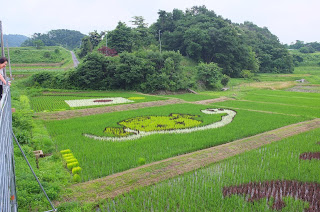 On Sunday afternoon I persuaded a friend to go with me to my favourite cafe near the lake in Miharu. On the way we stumbled on some 'ricefield art' (tanbo aato) which I was later told had been done by a group of local farmers. Scaffolding and stairs had been provided so we climbed up to take a look. The picture above is of a snake (this being the year of the snake) with a lucky drum on its back, and the one below is of a tree. I thought at first it was a pine but I think it's supposed to be the famous weeping cherry, Takizakura. Variegated rice seedlings  - red, black, yellow and white - are planted in among the green. (It reminded me a bit of the floral clocks in Victorian parks in England.) Anyway, it's a good show which will continue to delight until the rice is harvested in October. (Route 54 between Koriyama and Miharu) 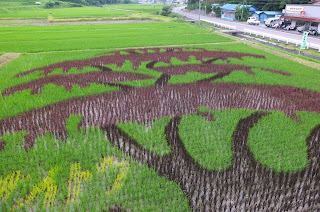 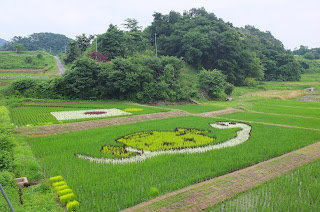 So on to Aotsuki (Blue Moon) Cafe where on the last Sunday of every month the proprietor performs a reading from the works of Miyazawa Kenji, poet and author of children's stories. Kenji lived from 1896 to 1933 and was a teacher and social reformer in Iwate. His most famous story is Night on the Galactic Railroad (Ginga Tetsudo no Yoru). It's a wonderfully imaginative tale of people on a train to the afterlife - even victims of the Titanic on board. It's been made into an anime film - but with some artistic licence all the characters are cats... His most famous poem is Ame ni mo Makezu (Strong in the Rain) which was often quoted at the time of the disaster as it describes the resilience of people in the north.

We heard the first two chapters of Kenji's last work Biography of Gusukobudori. The reading was spirited and the characters came to life - the ingenuous young children, the wicked taskmaster. But Kenji's work is never cheerful. This story is set in the Great Tohoku Famine of 1906. First the father and then the mother leave the house (Lawrence Oates style), telling the two children to make the remaining food last. Later a man comes to the house and makes off with the girl. A capitalist who buys the property sets the boy Budori to work to earn his keep. Then a nearby volcano erupts, the factory closes, and the boy sets out on a new adventure. I was amazed that there was such poverty in Japan in the 20th century. It's not that long ago. It makes you realise how far Japan has come in a hundred years. Kenji's self sacrificing values I find a bit much but from the discussion afterwards there's no doubt that his work resonates with people here.
It was a very pleasant way to spend a Sunday afternoon (her coffee and cakes are delicious) and I'd like to go again.
Still no rain in what's supposed to be the 'rainy season'.
Anne
Aoitsuki Cafe Miharu - Reading
Aotsuki Cafe Miharu