As I said earlier, we have new stricter food standards as of April 1st. The level of Caesium allowed in the new category of 'general foods' is 100 becquerels/kilogram. It was 500, so it's a big change. But three days into the new regime, bamboo shoots from Chiba (outskirts of Tokyo, Narita airport) were showing 120bq/kg and shiitake mushrooms grown outside in Miyagi  (north of here) registered 350 bq/kg.  Japanese are great foragers, and there are lots of lovely buds and shoots to be had at this time of year (make wonderful tempura) but mushrooms and berries really soaked up the radioactive nasties at Chernobyl so it's probably not a good idea to forage in the woods. You can buy cultivated ones anyway - though that's not as satisfying as getting 'summat for nowt'.
Talking of Chernobyl, I remember last summer bemoaning the fact that we didn't have facilites like they have in the Ukraine where people can go along and test their own food. Well, now we do. Koriyama, which covers a wide area, has installed 40 machines in village halls. I went to the one opposite my office in the Big-i  building next to Koriyama station and here's a picture of me with my newly tested rice from Hirata village. Yes, fellow rice planters and harvesters of the Odaira Club, you'll be pleased to know that the rice from Sato-san's farm is as near as dammit free from contamination. 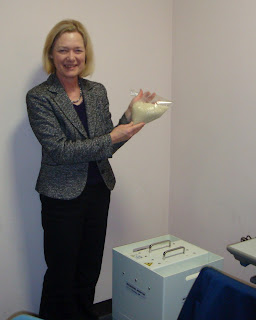 It works like this. You take along a bag of rice (5-6 cups) and they put it in the machine and you go back half an hour later for the results. I slipped out on a Thursday afternoon and it wasn't at all busy but the woman on duty said it would get busy from now on as spring produce appears in gardens and small farms. (You can take in food from shops as well.) To test vegetables you have to chop them up small and you need 1 kilo of stuff, as closely packed as possible. I got a slip of paper to say that no radioactive Iodine 131, Caesium 134 or Caesium 137 had been detected in the sample. But with the rider that the machine can't detect below 12.1 bq. According to the lady at the centre, it's not zero as there will always be some background radiation. A germanium machine gives more accurate results but those machines are very expensive (10 to 20 million yen, 75-150,000 GBP). The machine she was using (that little thing at my feet) costs 3.6 million yen (28,000 GBP).
By  international standards 100 bq/kg is low. The EU was 1,250 but tightened it to 500 after the accident in Fukushima. In Canada it's 1,000 bq/kg. Had some positive feedback from a reader in Canada. Take a look at the end of the post 1st April - All Change
He (she?) says, "The new limits on Cs-137 levels in food seem quite conservative to me, perhaps overly so. Here is a previous discussion following an article in the Vancouver Sun, which at least had the journalistic integrity to label the source as an "anti-nuclear group" in the headline:

Mine is the third comment. I calculated the dose from eating 400g a day of fish contaminated at twice the new limit to be 0.4 mSv, about 1/6 of average annual background radiation. So I think the new limit mainly serves to hurt farmers and fishermen without really improving protection."
I'll have more to say next time about how farmers are coping with the new regime.
Cherry blossom at its peak in Tokyo but still cold here.
Goodnight all
Anne
Posted by Anne Kaneko at 23:37