After the rather bleak photos in the last post here are some photos taken today of things that don't change. I stopped by at a village on the outskirts of town and then went on to Hachiman Shrine and Kaiseizan Shrine in Koriyama. It's the festival of Shichi-go-san, 7-5-3, when boys and girls of three years of age, boys of five and girls of seven, go to the shrine to give thanks and pray for health and happiness. I've never really known why it's this way, but on the radio the other day a Shinto priest explained the origins. According to him, in the old days both girls and boys gave up their short haircuts at the age of three and were allowed to grow their hair long. Five was the age boys wore formal hakama trousers for the first time. And when they turned seven, girls put on the obi, the stiff kimono belt, for the first time in place of a child's sash. The milestones in a child's life are different these days - first day at school, learning to ride a bike - but parents' wishes for their children's happiness don't change and it was good to see so many people out enjoying the day. 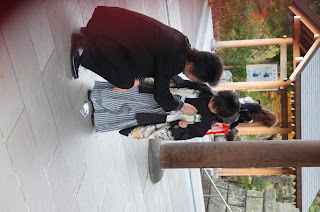 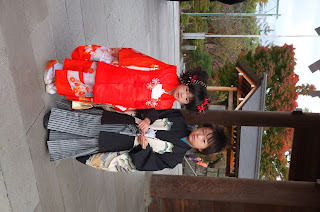 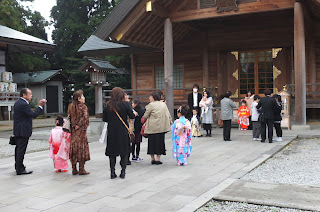