Radiation levels are not that high in Koriyama compared with other places in Fukushima but the city's trying to clean the place up so levels are back to a normal 1 mSv/year (0.23 μSv/hr). Schools, nurseries and routes to school were decontaminated last year. Parks and other places where people congregate were cleaned over last winter and in the spring. Now they've got round to domestic houses and gardens. Work started in October and by the end of this month 14,200 houses will have had their gutters and drains cleaned, shrubs and trees cut back, and lawns replaced (pics below).

In a separate initiative, agricultural land is being decontaminated. Our company owns some land which is officially farmland and last night I attended a second meeting about the plans. It's all very organised. The land will be scattered with zeolite which will be ploughed in to a depth of 20 cm. Then soil samples will be taken and potassium silicate added at a later date according to the results of the tests. We were given poles and flags which we were told to set up on our land asap - and leave there. The organizers hope they will be a good advert for Fukushima farming and might encourage more farmers to have the work done in the next round. One man said he hadn't farmed his patch since 3.11 and asked who would be responsible for getting rid of the weeds. It seems the owners are responsible. I'm ashamed to say that our company has not been looking after this land properly so we are in the same boat. So we can't get the work done unless we clear the ground (understandable, it is the Ministry of Agriculture that's in charge). There's no way yours truly is going to shift that vegetation so we will have to pay someone with the right equipment to do it. Need to think  about this.

In the meantime, here are some pictures taken yesterday of work in progress in Saikon near Sakubuta Pond where levels have remained stubbbornly  high. It was a lovely sunny day.
Anne 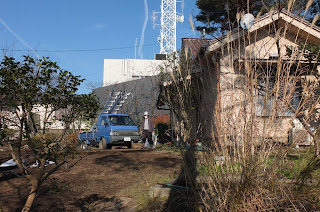