The snow that fell last week paralysed Tokyo and here in Koriyama the landscape remains bleak and white with piles of snow even in the centre of town, and the side roads and pavements treacherously icy.

News of Fukushima this week overshadowed by the snow, the Algerian hostage crisis, and the government's new policy to cure deflation. What news there was, was not good. Scandals about decontamination work in the exclusion zone with reports of workers being told to dump contaminated leaves in rivers, and of unscrupulous subcontractors pocketing the 10,000 yen a day 'danger money' which the government pays workers.

Took a trip to Miharu, ten miles away, where residents braved the cold to support the annual Daruma Festival. Here's a picture of the towns huge Daruma inscribed with the word for the year 地 (chi) which means 'land', 'earth' - chosen as it sums up recovery for Fukushima in this new year. Decontamination, getting farming back on its feet, a safe environment for children - these all depend on the earth. 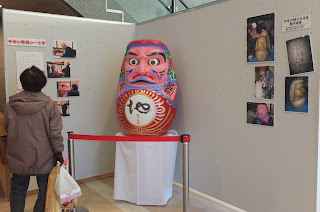 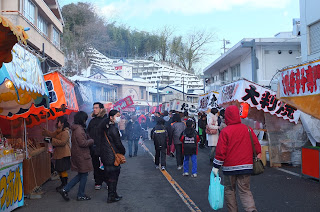 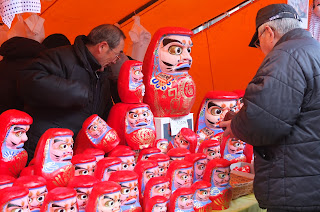 Usually when you buy a daruma it has no eyes. You draw one in, make a wish and fill in the other when your wish comes true. 'Why do Miharu daruma have eyes?' I ask Hashimoto-san. He tells me they're just busting with good luck already and have two eyes looking in all directions to keep the evil spirits away. In that case, I'd better have one! 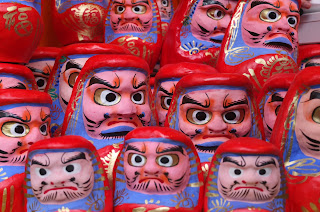 Here's me with my daruma and a new year decoration. 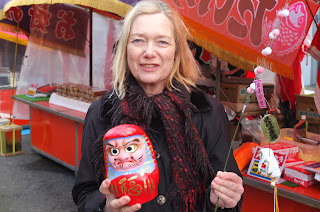 Half an hour later Hashimoto-san has donned a mask and backed by the local drumming group is dancing the Hyottoko dance. I've seen him do this many times. The moment he puts the mask on, he becomes a different person, losing his inhibitions, swirling with the music, impersonating a shy young girl or a brazen old man. He plays up to the crowd and they love it. It becomes impossible to take photos and once he starts chucking tangerines into the audience (a lot of tangerines), I'm forced to put my camera away in self defence. 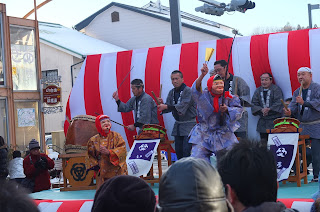 More tranquil is the Zen temple, Fukuju-ji, a picture in the snow. 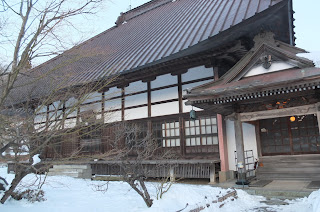 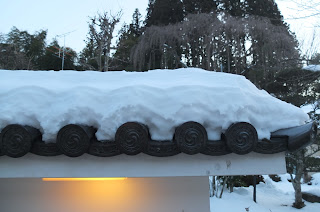