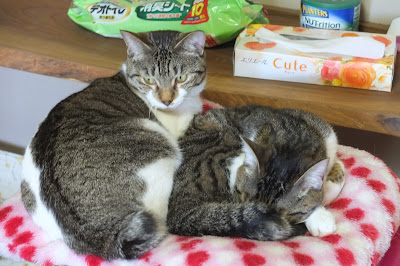 A couple of weeks ago I visited an acquaintance who was volunteering at a cat shelter in Inawashiro. The shelter is run by Japan Cat Network which was established in 2000 down in Hikone, near Lake Biwa. After the disaster Susan Roberts came up to Fukushima to help abandoned animals in the exclusion zone. She's been going mainly into Namie, rescuing and arranging spaying and neutering of cats. They also have feeding stations and cameras for the other animals roaming there.

When I was at the shelter she was caring for 34 cats and 8 dogs. Each cat has its own story. A few were in cages, still too traumatised to be able to interact with the other cats or with people. Most had settled down and seemed content in their new surroundings. But as I heard how each cat had come to be in the shelter and the time and effort given by those running and volunteering at the shelter to rehabilitate the cats both physically and mentally, I came to appreciate just what a huge task this is. Here's what Susan says about her work:

"I came out after the disaster to help evacuees with the many animal issues which they continue to face. The volunteer teams that we organize have rescued more than 600 animals since March 2011, including chickens, cats, and dogs. We help to care for animals on behalf of evacuees that have difficulty returning to the area themselves. We continue to care for some of their pets here at our shelter, until guardians can find pet friendly housing. We are an entirely volunteer run organization, and we'd be happy to hear from those interested in becoming shelter volunteers, foster care givers, and/or adopters for pets. We would also be happy to provide advice and support for people hoping to help stray or abandoned animals in their own communities. We can be reached at info@japancatnet.com

Japan Cat Network depends entirely on donations so if you're inclined please give a donation, or support  their fundraising events, or best of all, consider fostering or adopting a pet. It's a very worthwhile cause and NPO certificated.  Check it out here:
http://japancatnet.com/
That's all for now,
Anne