Today was a special day when even a seasoned old-timer like me felt the magic of being in Japan. A supermarket is to be built on the old factory site which the company vacated nearly two years ago and this morning a ceremony was held to 'placate the gods of the earth' (jichinsai 地鎮祭) and pray for safety during construction. 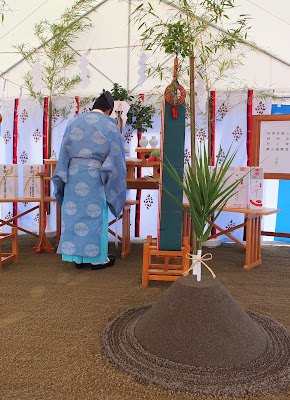 A striped tent had been erected next to the diggers. One by one we entered, ritually purifying our hands with water. Inside, the ground was covered with finely raked sand and there was Shinto music playing. Bamboo branches formed a frame for the altar which was laden with sake, rice, fruit, vegetables, and even a fish. In front of my seat was a neat cone of sand which three representatives would dig into during the ceremony. But first a loud wail on the part of the presiding Shinto priest resplendent in blue robes, tall black headdress and pointy shoes, to signify that the kami, the spirit of the place, was coming down to be amongst us. (The ceremony finished in the same way as the kami 'ascended'. Hmm. I thought it was the spirit of the place maybe it lives somewhere else ... ) Next there were prayers, unintelligible chanting, but for the name of the supermarket and the name of the construction company sounding out incongruously from time to time. Tiny squares of white paper were scattered like confetti in the four directions. Then the high point: one person from the supermarket, and two people in charge of construction ceremonially, and ever so slightly, broke down the cone of sand with miniature spades and other implements made of wood. Then it was our turn to go to the altar and make our offerings of sasaki branches - two bows, two claps, one bow. And finally a sip of sake for everyone. 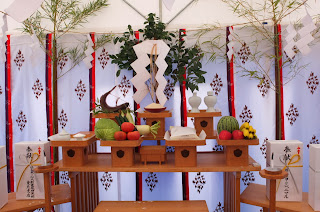 I suppose the equivalent in England would be the 'topping out' ceremony. I have to admit I do enjoy things like this and think it's important to mark milestones. And this is a big milestone for us. At last I can say out in the open that local supermarket giant York Benimaru will be building a supermarket on our land. There's a certain sense of satisfaction as the former CEO was my husband's best friend, and gave me a lot of support in the early days. And I think the new development will be good for the area. I was told today they will be looking for 100 new staff. The target date for opening is 29 January next year.
So it's been a good day.
All the best.
Anne