Truly into winter now. The autumn leaves blown off the trees and two or three inches of fresh snow this Sunday morning.  I've been so busy of late I didn't get much chance to enjoy the autumn but the harvest is now safely gathered in.

Rice is big here. When I first came to Japan most people ate rice three meals a day. But as people discovered the delights of hamburgers and cream cakes, consumption fell and the government reduced the acreage grown to rice in  a policy called gentan 減反. Fukushima has the dubious honour of non-cooperation in this policy with the worst record of gentan in the country.

But here in Fukushima people really like their rice and I've become something of a convert. New season rice shinmai  新米 is the thing and it is delicious. There was some criticism that the new system where every sack of rice has be to passed through a machine to measure levels of caesium would delay sales but the 200 machines in the prefecture seem to be coping. Some sacks are taken off for further testing (it's reported in the papers) but they're generally proclaimed ND (non detectable) and the rice is safe to eat.

A few months ago I saw a film (at the Sukagawa Short Film Festival) about a group of rice farmers in Tenei County, south of Koriyama, who practice organic farming and for three years running had won the gold medal for the tastiest rice in Japan. The film was a documentary of the lengths they went to to make sure their rice was safe.

First stop the Japanese Society of Soil Science and Plant Nutrition which ever since the nuclear tests at Bikini Island in the 1950s has monitored radiation in soil samples all over Japan and determined that the take up of caesium by the rice plant is 1%. In April last year the soil in Tenei County measured 1,128 bq/kg, which would give a level of  11.28 bq per kilogram of rice - well within safe levels - but the farmers decided to do everything they could to reduce levels further. In systematic testing they added potassium, zeolite, and prussian blue to the soil. The last is the ideal medium (it was fed to cows in Chernobyl) as it only absorbs radioactive materials whereas zeolite also absorbs nutrients such as potassium which can affect the health of the plant. Prussian blue is expensive but they managed to get funding for the experiment and I'm left with the abiding image of bright blue water being hosed high over the emerald green fields.

Farmers here have been on a steep learning curve and gone to tremendous efforts to make the rice safe. Here's a picture of my favourite rice from Hirata County and a close up of the label that's on every bag of Fukushima rice (with home page address and phone number).
Now if you'll excuse me, I think I'll make some sticky pink rice (mochi rice and azuki beans) to cheer me up and keep out the cold.
Anne 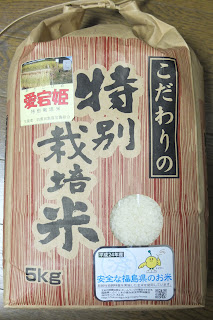