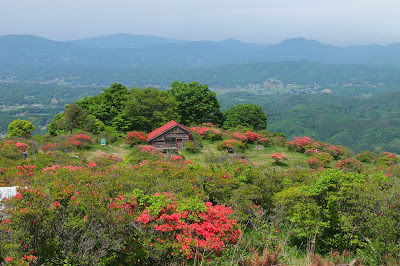 The rainy season was supposed to have started in Osaka and Tokyo a couple of weeks ago but the whole country has enjoyed dry, sunny weather with hardly any rain. I've been making the most of it getting out and about in Fukushima. It really is a beautiful part of the world.

There's a place I'd always wanted to go to, a plateau home to wild mountain azaleas, in the hills east of Koriyama. On the first weekend in June I climbed up there with a friend. It's not on the main tourist drag, just a local beauty spot, but the weather was perfect and the views spectacular: one of those times you feel glad to be alive. 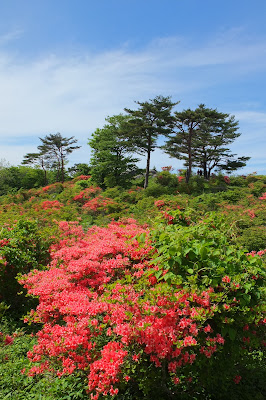 Another magic moment on Saturday when I visited the village just outside Koriyama where they make traditional dolls. A colleague had been given a good-luck daruma as a leaving present but didn't know anything about them, a gap in his knowledge I felt I had to put right. The scene in the farmhouse was magical and I didn't want to intrude by taking photos. As usual, the workers, only two of them, were sitting on the floor applying the damp paper to the wooden moulds and painting the finished dolls. Little daruma left to dry on sticks in baskets of straw shone bright red in the sunshine. All the shoji were pushed back so the side of the old farmhouse was open from ceiling to floor. And skimming silently in and out of the house were swallows. The silence, perfect harmony of people and nature.

Maybe it was too quiet for seventeenth generation Hashimoto-san who seemed proud of the brand new car park which has been built over the rice fields just down from his house. The city helped him pay for it and he's all set now for some tourist buses. Before the disaster he was one of the stopping off places for the Fukushima bus tours but they haven't re-started yet. (Takashiba Deko-yashiki, Nishida-machi, Koriyama)

On Sunday I went to visit my friends in Kitakata, west of the prefecture, north of Aizu. They were saying that tourists are returning to the town and that there are queues for the famous Kitakata raamen noodle restaurants, some even sellling out before lunch (In Kitakata there's a wierd custom of having noodles for breakfast, called asaraa!) But they did add that tourist buses are few and far between.

I went with them to see more flowers, this time lilies - himesayuri - which grow wild on a hillside outside the town.You can see why those early plantsmen, Kaempfer, von Siebold et. al. were excited by the exquisite flowers they found growing wild in Japan - wysteria, peonies, azaleas, lilies - which they took back to Europe where they were hybridised and came to grace Victorian conservatories.

Unfortunately, the weather's set to change. There's a typhoon in the south which may head up this way later in the week.
Love to all
Anne