Sorry there was no new post last night. I was working late. More of that in a moment. I have good news about the shelter we went to in Ishinomaki. I've been told that some people were moved out into a nearby primary school. This will have made more space and improved living conditions. The partitions were erected, I was told, on Sunday. And the children started colouring away on Saturday when they came back from school. Someone I don't know 'Anonymous' has  left a comment on this blog saying he/she is in the area and can take photos. I'm trying to make contact. The power of the internet...
At work we've been trying to piece together information about our customers, but it's still very difficult. The situation is changing everyday and the forecasts seem to be continually revised downward. Factories on the coast which have been damaged still have no plans for re-opening. The Mitsubishi factory in Koriyama is still closed. Growers and businesses in the 30 km evacuation area have left the area and are unlikely to resume any time soon. Because of soil contamination and consumer confidence it's very difficult to make forecasts for sales of boxes to the agricultural sector. On the bright side, Sony Energy Device battery factory has started production and will be working throughout Golden Week to catch up. And JA Shirakawa (south of the prefecture) has announced it will be shipping its cucumbers (in our boxes). But March sales finished 30% down on last year and forecasts for April and May are 15% down. This is a very bad situation, and we're pouring in cash at an alarming rate. We have savings but what about those companies that don't? One company unable to pay could easily set up a chain reaction. It's scary.
As well as following up on sales and payments, we're cutting back on purchases of paper (we increased them after the earlier shortages), only making what will sell now (not creating extra stock), and I'm sorry to say cutting wages. I've taken a pay cut and tomorrow will explain why we need to cut wages. I hate doing it as we don't pay very much anyway. And of course it has to be done in consultation, following  the proper procedures. But since we don't have any unnecesary spending we can take the knife to, I'm afraid we have to trim the wage bill. The plan is that we close a couple of days a month and the staff receive 70% of the wage for those days. There will also be shortened hours on the same basis. There are grants to compensate us for four-fifths of the 70% paid but the money won't come in for several months.
So after the (dare I say it?) excitement of the aftermath of the earthquake with all its repercussions, we find ourselves in a new, more settled state. But only now is a new, grim reality beginning to unfold. We may not have suffered direct damage from the earthquake or tsumami but indirectly our business and many many like us are fighting for survival. So, if you'll excuse me, from now on this blog becomes intermittent. I think there will be many more late nights in the office in the coming weeks.
As if to match my mood, the weather today was cold with heavy rain. Bad news for the cherry blossoms. But then that's the thing about chery blossoms here. The fragile, single Somei Yoshino, lasts only a few days and a cold storm will finish it off. Like life, it's very short. Catch it while you can.
And to finish, a picture of perhaps the most dramatic earthquake damage in Koriyama!
Goodnight.
Anne 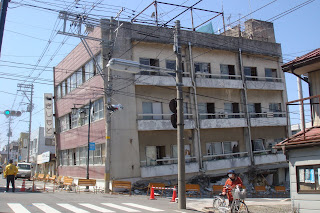