O-Bon and the Supernatural

I have four days holiday. The company is closed for O-Bon (お盆）, our annual 'works holiday'. According to Buddhist tradition the souls of the dead come back to visit at this time, a bit like All Souls (without Halloween). In this area, people who've had a death in the family in the past year set up lanterns on high poles to guide the spirit on its first visit to the house (arabon 新盆) .
O-Bon is also a time for fireworks and festivals, hanabi and matsuri (花火、祭）. From my window I can see a firework display going on right now. Last Thursday, August 11th and 5 months after the disaster, firework displays were held at ten places along the coast, from Iwaki here in Fukushima to Iwate in the north - the fireworks symbolising the spirits of the dead and hope for the future.
The big festivals of the north went ahead as planned: the Kanto Festival in Akita where each  person balances a frame of lanterns - on their back, on their head, on their shoulder; the Nebuta Festival in Aomori with its huge paper floats; and the Tanabata Festival in Sendai with its flowing paper decorations (hundreds and thousands of origami paper cranes donated from people all over the world). Further away in Shikoku there is the Awa-odori with the ladies' delicate footwork and hand movements. Everyone is agreed that the Matsuri are special this year. They'd become entertainment but they've have gone back to their roots - a celebration of life when times are hard. At the end of O-Bon people will float lanterns on rivers to see the spirits off again, another beautiful sight.
In olden times people would tell ghost stories at this time of year (Lafcadio Hearn, the Victorian enthusiast  collected them in Kwaidan). Spine-chilling tales. A good way to keep cool. So here are a couple of stories of the supernatural.
This one is true and was told to me by a good friend who lives in Sakuragaoka on the outskirts of Koriyama where we used to live. Everyday she walks her dog. Two days before the earthquake, she noticed crows collecting in a field, with lookouts on the trees at each corner. The next day, the ground was thick with crows, a black rectangle. She was a bit frightened. Hitchcock-like. The birds must have sensed that something awful was going to happen. Has anyone else heard any stories like this? It would be interesting to know.
Now here's another. People are beginning to say there's some jinx as we keep getting earthquakes around the 11th of every month. There certainly was a big one on April 11th, and one in the middle of the night last Thursday. Harder to find evidence for the other months. I guess people just remember when they come on the 11th. I looked it up and the full list is here, all the earthquakes since March 11th. There are still 10 to 20 quakes a day but reassuring to see that they are force 1 and 2, marked in grey and blue. Force 3 are in green, 4 in yellow, 5 in yellow ochre, 6 in orange and red, and the big one - 14.46 on March 11 - is fluorescent pink. For me scrolling through that first month was spine-chilling indeed.
http://www.seisvol.kishou.go.jp/eq/shindo_db/db_map/indexemg.html
And finally, two more stories for which I have no corroboration so include them here amongst the tales of the wierd and unsubstantiated. There's a scandal on about Tokyo Electric which has lost track of over 100 workers who worked at Fukushima Daiichi so can't test them for radiation. Admittedly in the confusion in March names may have got mis-spelt, addresses not taken down properly. But it's said there's traffic organised by the yakuza for people to work at the plant (homeless, people in debt). I don't know if it's true. But certainly the money's good. Now, another rumour has it that Kan closed Hamaoka Nuclear Power Plant at the request of the US. Too near Yokosuka Airbase. In retrospect it does seem odd that that announcement went through without any complaints from the opposition or Tokyo Electric. As I say, this is hearsay. I don't know if either story is true.
If anyone has any stories akin to the  crows, please let me know.
Anne 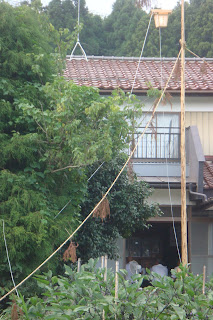