Thoughts on the Anniversary

People are out today doing what you do on a Sunday, going shopping, watching the events in town. But the date and time is etched in the common psyche. Latest figures for the disaster are 15,854 dead, 3,155 missing. 344,000 people displaced. Recent, shocking, revelations here in Fukushima: at least 5 people left behind in the evacuation starved to death in their homes; and  rescue workers intending to go back to the coast at daybreak were switched to evacuation duties and the search for survivors abandoned.
Excellent BBC documentary 'Children of the Tsunami' now on YouTube BBC Children of the Tsunami (14 March: Sorry, it's been taken off though snippets available) which reminded me of our trip to Ishnomaki in April last year. We took  cardboard sheet to use as partitions and I had the bright idea of taking pens and crayons for the children to decorate them. I didn't mention it at the time as it was all too raw but the parents of Okawa primary school, shown in that documentary, were in that evacuation centre. At that time the parents were out everyday searching the rubble of the school and they were talking about the need to get more diggers in (there was only one). I remember hearing one person ask another if she'd found her child. On hearing that she had, she said, 'Yokatta ne' (That's good). It seemed such an odd thing to say. How can you be happy to find a body? It was outside one's normal comprehension. Another problem with that evacuation centre was that it sheltered families from Okawa school and another school where all the children were saved. If you watch the BBC documentary you'll understand why feelings were running high. So the loss is awful, there's great sadness and a year on it's appropriate to remember.
At 2:46 pm today the Emperor led the nation in a minute's silence and service of remembrance. He's only been out of hospital a week after heart bypass surgery. Bless him.
In Fukushima 160,000 people have evacuated, of these 62,000 have gone outside the prefecture. More and more people are leaving, especially those under 40. The most important thing is to stop this exodus. This means reassurances that Fukushima is a safe place to live (decontamination, free healthcare for the under 18s), and jobs.

I think everyone who experienced the disaster has changed. Maybe everyone in Japan has changed. I've certainly learnt to appreciate all those normal things which you take for granted but which are actually very precious - going for a walk, playing outside, gardening, families being together, good safe food. A phrase from one of the songs someone was singing at the festival yesterday sticks in my mind, ささやかな幸せ, sasayakana shiawase, a modest amount of happiness. I've never been a believer in the 'right' to happiness. Life throws up too many obstacles. But appreciating the ordinary things can make you happy enough.
Let me leave you with this picture which says it all.  (Koriyama station area yesterday.)
Anne 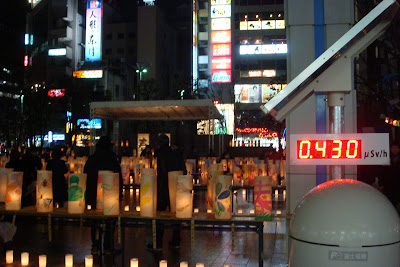